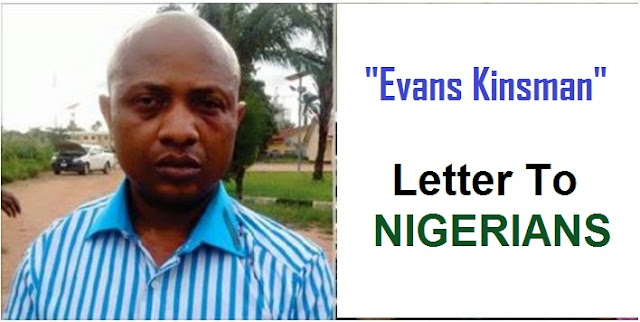 Based on the recent development going viral on the internet regarding to the arrest of the Mr. Evans, Nigeria most intelligent kidnapper as declared by the Nigerian Police force, and concerning the negative vibes been thrown at the Igbos tribe by some members of the public due to the incident.
Mr. Azuka Onwuka a young man who hails from the same town with the kingpin has condemned the criminal act of Evans the kingpin and urged Nigerians irrespective of their tribe to treat the matter in their comments as a national case and stop aligning the image of the Igbos to the crime.
In his words:
“I read the news about Evans the kidnapper. The report said he is a Nigerian, an Igbo, an Anambra indigene, and an Nnewi indigene from Umudim.
Umudim is the same part of Nnewi that produced the followings;
1. Ikemba Nnewi and his wealthy father, Sir Louis Odumegwu Ojukwu, who lent his Rolls Royce to Nigeria for the use of Queen Elizabeth II when she visited in 1956, because Nigeria did not have a befitting car for the Queen.
2.  Nigeria’s first indigenous motor vehicle manufacturer, Innoson, who also manufactures aircraft parts for the Nigerian Airforce, is from Umudim Nnewi too.
3.  Nigeria’s first female Governor of a state, Dame Virgy Etiaba, is also from Umudim Nnewi even though born by Otolo Nnewi parents.
I am from Umudim Nnewi too. So Mr Chukwuzubelu Onwuamadike (Evans the kidnapper) is my kinsman. The police described him as the most brilliant and richest Nigerian kidnapper. Sadly, he misapplied his talent.
There is no justification for crime. For me, kidnapping is worse than armed robbery because it instills fear into people and can scare away people from a city.
Even though Evans said his business was crippled by the seizure of his goods worth over N25 million by the Customs, which made him to go into crime, definitely he chose the wrong means to make wealth. It is frowned at in our community.
He also claimed to be suffering from stomach cancer. Maybe his fear of imminent death made him more brazen and desperate to make more money to bequeath to his wife and children and that was why he could demand as much as one million US dollars ransom from his victims.
Two types of crime have threatened the progress of Nnewi: armed robbery and kidnapping. Gov Mbadinuju eliminated armed robbery with the Bakassi Boys in 2000 while Gov Peter Obi eliminated kidnapping around 2012. Gov Obiano has maintained the tempo. No state governor should allow armed robbers and kidnappers to feel safe in his state.
But despite the innuendos from some characters, the crime of Evans cannot detract from the greatness of Nnewi city, nor Anambra State, nor Igbos. No. Evans cannot stain Nnewi, a people who gave Nigeria its first Acting President and third Senate President (Dr Nwafor Orizu); a people who gave Nigeria its first international market that was built and run by the indigenes; a people who taught Nigerians that Japanese and Chinese manufacturing prowess could be replicated in a community in spite of epileptic electricity; a people who taught Nigerians how to use luxury buses for long-distance transportation, providing an alternative where government’s trains could not suffice.
Sadly most of his victims were industrialists from Anambra who had laboured over the years to make their money. The monkey cannot be working while the baboon is eating.
The irony of life in Nigeria is that when a person excels, his hometown, state of origin and ethnicity are ignored and he becomes an exemplary Nigerian, but when he does something bad, he is no longer a Nigerian but from his town and ethnic group.
The story of Evans should serve as a lesson to many that crime does not pay. Because he was a wanted man, he could not even take the money home to build anything. Rather he was in hiding until he was captured. He has brought shame to his family. Unfortunately, his children will live under the shadow of his crime”
Azuka Onwuka
(Agunze Na Nnewi)