This is the story of Dr. Ewere Thompson Nosa, aka “working master” as fondly called. Nosa is an indigenous of Ugo village in Orhionmwon L.G.A of Edo state. A graduate of the University of Port-Harcourt and a medical doctor in profession. The story of Dr. Nosa is not just the most inspiring but also one of the most motivational story in the 21stcentury.
In a chat with Starzo.com the young doctor disclosed his ordeal as a student and how God saw him through the huddles of life.
In his words as he narrates;
After rounding up my secondary school and losing my dad to the cold hands of death in 2009 , I decided to fend for myself in addition to the support I had from my wonderful siblings, I did this because I didn’t like depending on anyone wholly, and the fact that finance was limited and things were not all rosy.
So I started off as a phone technician at Third junction in Benin city, it wasn’t easy for me as I was a bit too young and innocent to hustle in that kind of environment, I faced a lot of reproach , rejection and oppression. I can remember a day that some cultist had to beat me up at my place of work because I didn’t fix their phone to their specification. 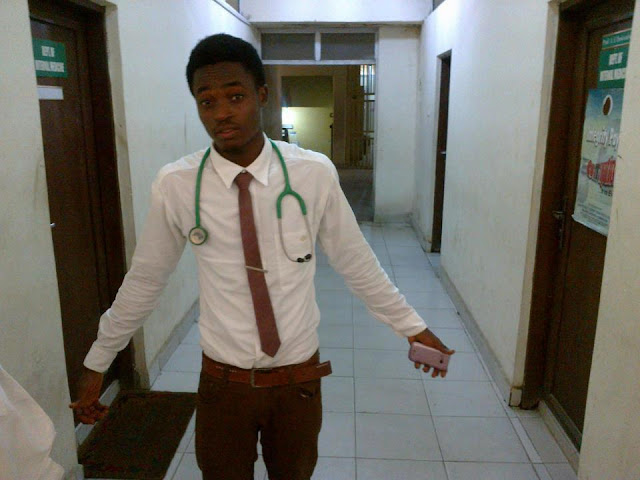 I also faced a lot of disappointment even among my loved once. Well that’s all history, I endured all, passing the stress with joy. I remember those days I use to cry in my room thinking of committing suicide hmmmn…good old days. Well that same year I registered for jamb and Post-UME , I studied very hard especially after work hours and I was offered admission to study Medicine and surgery in the prestigious University of Port-Harcourt, River state, Nigeria, having a total score of 60.01 of which the cut off mark was 60, hmmmn I was lucky.
January 2010 I started my first year in medical school. I got to UNIPORT without having a place to lay my head, and I wasn’t having enough money to rent an apartment off campus meanwhile hostel allocation was yet to be done. So I teamed up with my dear friend Edafe, we entered one of the hostel, broke into one of the yet allocated room and started living there. A week later some guys who once resided in the lounge came back from holidays, throwing our belongings out and sending us to the street. I patched with Edafe for a while and kept looking for a place to stay, at least to keep my belongings. I begged several persons but none obliged initially not until a day or two when a good Samaritan (a colleague of mine) accepted to help. He only accepted to keep my belongings while I find somewhere else to sleep. I was happy anyway.

So I decided to put up in class rooms , I used to keep my paste, tooth brush, powder, small towel, sponge and soap all in my school bag. To freshen up I will go to a nearby hostel to do that then go to my friend hostel to dress up. I did this for about 2 weeks until he asked me to pack out as my big bag was occupying a considerable part of his small cubicle, so I moved out in search of a new place to keep my belongings.

I met another colleague of mine, in this case a senior colleague, he saw me and was surprise that I had emaciated within weeks of school resumption as he once saw me when I broke into one of the hostel room the first day I resumed Uniport. He decided to help keep my belongings and even offered to allow me sleep in his cubicle and I was delighted but unfortunate for me his younger brother who stays in same cubicle (small room) with him was not happy to receive me. I didn’t blame him thou as the place was too small to accommodate 3 persons, so I begged them to help me keep my belongings while I sleep in Choba class rooms they obliged.
Two weeks later, Uniport formally brought out list of student that got hostel accommodation, unfortunately my name was not there as my post -Ume score was relatively low comparatively to my colleague that was offered accommodation and the fact that I was not an indigene of River state placed me out of the list. I felt bad, so I decided to rent a cubicle space in Abuja campus from one man O war guy who was offered hostel space in the campus, having Engr. Edafe and Dr Donald as roommates. So I got a space in abuja campus thinking I would have a place to lay my head. Quite unfortunate for me, the Man-O-war guy sold same space to one other guy, collecting double money for a single space. I and Edafe confronted him but he stood up against us with his team asking us to kneel down, hitting us badly and threatening to throw us out. Who were we to fight Man O war? We were no body. The guy that was allocated with us was another tyrant, so to avoid having differences with him I decided to sleep and live in Abuja campus class room while keeping my belongings in the cubicle I rented. It wasn’t easy as I spent the whole of my first year in class rooms sleeping, brushing and eating there.
My first 3 years as a medical student wasn’t easy as I had to battle with financial difficulties and accommodation issues. Do you know I never ate meat all through this 3 years? Then I use to cook without adding meat, because I couldn’t afford such luxury. My stew was a combination of locally made palm oil, sachet tomatoes, pepper and maggi..lol. I don’t cook soup, what I used to do is to buy soup from mama put (mama abuja restaurant), I will buy N200 soup then ask the sales personnel to exchange the meat in the soup for more soup, I will then go to my hostel to make EBA, managing the soup so as to take me for days (at least 2-3 days). Life was hard but it didn’t stop me from working very hard, I read my books as if that was the only thing I had to do with my life.
As at my 4th year I was a bit stable financially and I was able to settle my accommodation issue. I started working as a private teacher to some well to do student who pay me to put them through basic medical courses. I also involved myself in hostel politics, Music (click on the link above to download my hit single that talks about how God changed my life) and several business opportunities.
My financial state changed, combined with the money I used to receive from home, I was much more stable till I finished my medical school. Thou I was stable I couldn’t stop sleeping in class rooms because I was addicted to it so I stayed and read in class rooms even when I was able to afford good accommodation. I spent 7yrs and 6months as a medical student in Uniport of which I basically spent 7 years of my days sleeping in hard woods of Abuja campus. This earned me my nick name (working master, working lord, working skeleton, Machine etc.), as I was always found in class room reading. 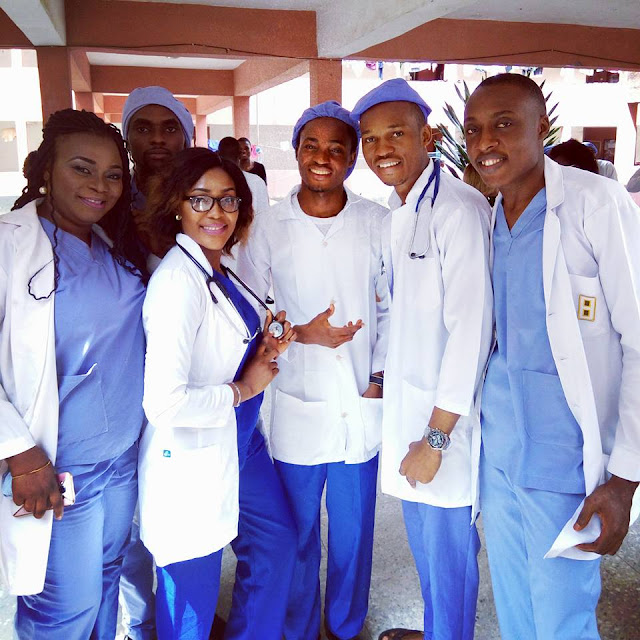 I finally graduated from Uniport as a Medical Doctor, being one of the best student Uniport medical school have ever graduated with result that fancy the eyes of everyone. Why am I telling this story, this is to tell you that “IT IS POSSIBLE” as nothing is impossible in life don’t get discouraged, give life your best hit even in the hardest times, if I Nosa the phone technician can turn Dr. Nosa a medical Doctor, so you can also be anything you want to be in life.
Remember, NOTHING GOOD COMES EASY.
Dr. Nosa