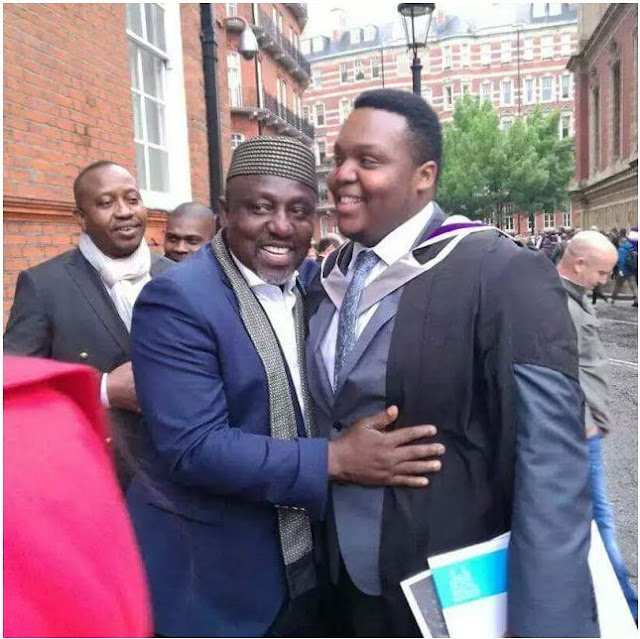 According imocitytv.com, Ahamefula Brendan Rochas the son of Imo State  Governor Rochas Okorocha has been confirmed dead by his personal doctor in London. He died at The Royal London Hospital which is a very large teaching hospital in London located at White chapel Road London, E1 United Kingdom.
Ahamefula Brendan Rochas who graduated with first class in Mechanical Engineering from the University of Manchester on 16th of July 2015 was confirmed dead shortly after collapsing at his resident and was rushed to the nearby hospital where he was confirmed dead.
His doctor told his relations who gathered at the hospital that they will still do several other test to confirm what led to his dead as all test they have done yield no fruit because the result proved his systems are all intact and there’s no trace as what may have caused his death.
Recall that The elders of “OHA” of Owere “Nchi Ise” in Imo state few days ago visited the grave side of the founding fathers of Owere Ekwem Arugo of the 14th century in which they called on the ancestors of the land to rise against any “inhumanity” against the people of Owerri by the government.
A source close to governor Rochas Okorocha said that since the news the death of Ahamefula came to the attention of the governor, he hav’nt been himself as he shouts angrily at anybody that come close to him.

If this is true as said could it be related with the recent crisis induced by the governor by the demolition of the popular Owerri market? mmmmmm