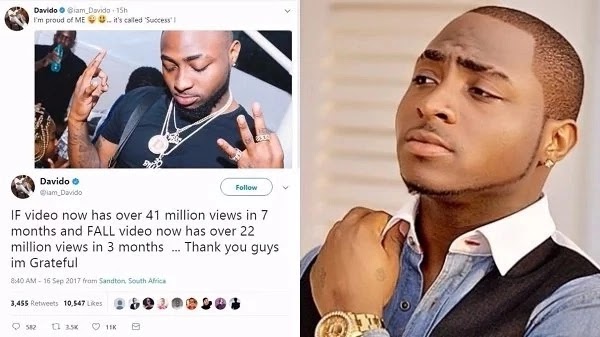 Award-winning musician, Davido, shares the figure of views his songs has had this year.
He claimed the video of his first single ‘IF’ which was released in Febuary 2017 has had a massive 41 million views in seven months while ‘FALL’ is not doing badly with 22 million views.
NAIJ.com gathered that Omo baba Olowo was in South Africa when he shared the news on social media to appreciate his fans.
In his words;
‘IF video now has over 41 million views in 7 months and FALL video now has over 22 million views in 3 months … Thank you guys im Grateful.’
Screenshot from @iam_Davido’s Twitter page. He also posted a picture of himself staring at his 30 billion gang pendant, he captioned it; ”I’m proud of ME … it’s called ‘Success’ !” Davido (Source: Twitter) The singer who just launched a clothing line called ‘IF’ is indeed making Nigeria and Africa proud.