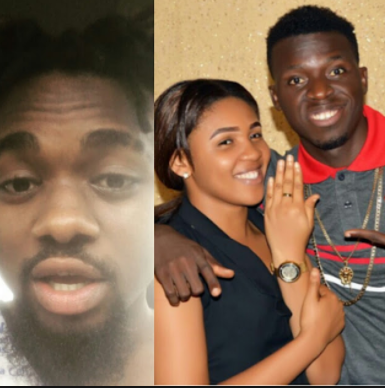 The drama is still on and Dj Timmy, the official jockey to rapper, Yungsix has once again reacted to comedian, Akpororo’s jokes about his boss.
Akpororo recently spoke to HipTV on his controversial joke about Yungsix where he said the rapper should have used the 3.9million he spent at a night club to buy a hit song.
In the interview, Akporor said, ‘with the answer his DJ got, he suppose to know say he mess up. I be comedian..so no beef. I no come they yab am. I just talk my own, e don pass. I have more to say but whom he go help. Yung6ix warn that your guy, he too talk. Make him mellow down’.
LIB reached out to Dj Timmy and he went in hard again saying, ‘I was only joking, you know a joke is not always funny if its about you. I just wanted to say something extreme so that he can feel the wayI felt and the way fans of Yungsix felt when he made his own joke.
Don’t you think your own joke was a bit too extreme we asked and he said, ‘no, a joke is a joke, that’s why we call it a joke. There’s nothing like a joke is too far. We shouldn’t be selfish and self centered. I don’t know Akpororo, I don’t know his wife, I don’t know anybody, I just wanted to say something extreme that will get to him because of how I was feeling at that point in time’.
He also says he owes Akpororo no apology. In his words, ‘I’m a comedian, a hypeman and a Dj there’s nothing to apologise for and I cannot focus on social media comments of people that are frustrated and depressed’.
Then he went on to explain how he’ll react if he meets Akpororo at at event. ‘I don’t owe him any apology, but if should come at me with violence, I’ll give him violence. If he comes at me with peace, I’ll give him the peace. I don’t have anything to say to him because I was just joking. I was under the umbrella of jokes’ he said.
Dj Timmy also said he got thumbs up from a lot of A-list musicians, ‘do you know how many A-list musicians called me to say ‘nice one’?. That’s why I can’t be focusing on social media trolls. I went to Kings College Lagos, I was bullied all my life, I was abused all my life, so I’ve developed a thick skin to it. Internet trolls can’t get through to me’.