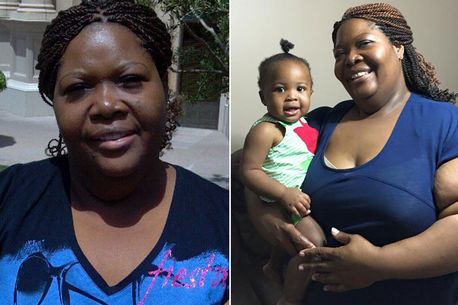 This is the first picture of the devoted mother who sacrificed her own life to save her three-year-old daughter in raging floodwaters.
Collette Sulcer, 41, was swept away in the Texas floods while trying to carry her daughter Jordyn to safety.
Rescuers found little Jordyn alive, clinging to her mother’s lifeless body. It’s believed the tragedy happened when she got stuck in a canal as she tried to flee rising waters in her car caused by Tropical Storm Harvey.
Police said her body was found floating in the water after she “absolutely saved the child’s life.”
“They were in the water for quite some time,” officer Carol Riley, a spokeswoman for the Beaumont Police Department, said.
“When the baby was found the baby was clinging to her. The mother did the best she could to keep her child up over the water.”
“The baby also had a backpack that was helping her float on her back and she was holding on to her mom.
“She absolutely saved the child’s life.”