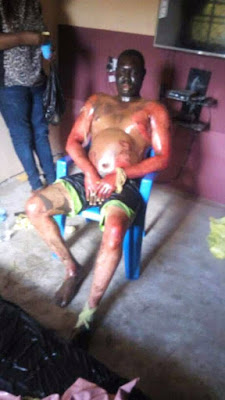 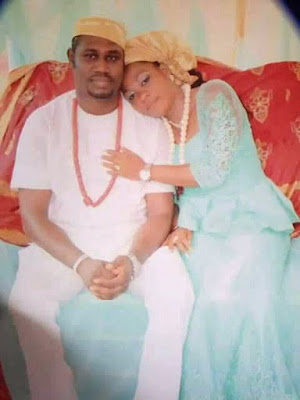 At first it seemed to be a blessed union for both couple not until few years after marriage without a child. Then the wife began suspecting that her husband is having an extra marital affair and that was the beginning of the end of the marriage and the life of both couple.
The man whose name was disclosed as Mr. Emeka is a business Igbo man who resides in Sabon Garri in Kano state with his lovely beautiful wife. The incident which took place on Sunday 28th May, left the entire town in a shock.
An eyewitness and a facebook user by name Okafor Victor who happened to be a neighbor to the deceased couple uploaded the photos and narrates the following ordeal..
“On that faithful Sunday, the lady was suspecting the husband of answering a call from his ex-girlfriend and grabbed the phone from him saying he has started again that two of them is going to die this, like a joke as the man went inside to sleep the wife  brought a gallon of fuel and poured it everywhere in the flat set the house on fire. We tried all we can to quench the fire but couldn’t because it was very late at night.
The wife died instantly at the spot but the man managed to escape and was rushed to the hospital but later confirmed dead after few days as a result of the severe burn”
Every effort in getting in touch with the family members of both deceased proves abortive as they’re still yet to recover from the shocking incident…more info coming.