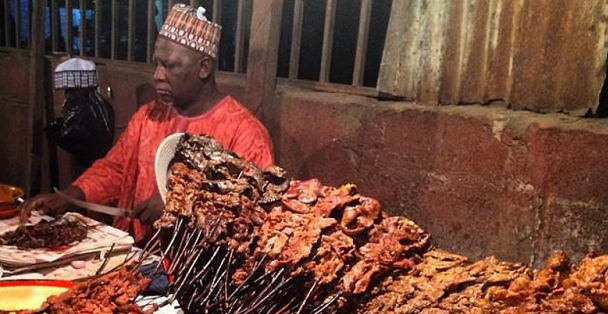 The Lagos state police has arrested a 35 year old roasted meat (suya) seller, Alliu Abdulahi, for allegedly attempting to slaughter a four- year-old girl for Suya.
The suspect had allegedly abducted the girl at White sand area of Ebute Meta, while she was playing with her mates in an open field.
But as he took her to a secluded area where he attempted to slaughter the girl with a knife, another man saw him and raised alarm. The alarm attracted other people who rescued the girl. DailySun reports that the suya seller who resisted the people stabbed one person and bit another.
Commissioner of Police, Mr Fatai Owoseni, who confirmed the incident to newsmen yesterday said that the Good Samaritans succeeded in rescuing the victim from the grip of the suspect. He said that one of the Good Samaritans in an attempt to disarm the suspect sustained minor injury on his hand.
He said:
“The suspect was subsequently handed over to the Police at Denton Police Station, Oyingbo. Police investigation revealed that the suspect had abducted the little girl from where she was playing with her friends with the sole intention of slaughtering her. It is a clear case of kidnap and attempted murder.
“The child has been reunited with her mother, while the kidnapper and would-be murderer will be arraigned in court.” 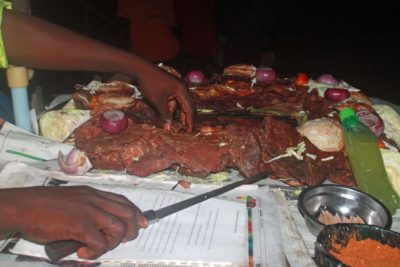 When approached by newsmen, the suspect Alliu could only mention his name, but could not express himself in English Language. His relative, Akilu Isa, who was also arrested, claimed that he was insane.
According to Isa:
“he is my brother. He is not mentally stable. He had a shock while he was a child, which affected his brain. At times, he would behave normal and at other times he would behave abnormally.
“I am a suya seller. I sell suya at White sand area of Ebute Meta. My brother was not okay before. He was treated in the village five years ago before he came to Lagos. Maybe the sickness has come back again.
“On the day of the incident, while we were selling suya, suddenly my brother started behaving funny. He grabbed the table and turned it upside down scattering the entire suya in the process.
“We all sell roasted meat (Suya) at the market. On that fateful day, the mental disorder gripped him. He immediately picked up the girl and at the same time, lifted a knife which he uses for Suya.
“At that point I beckoned on my other relative, Salisu, to come to the girl’s aid. We immediately gripped him and succeeded in retrieving the knife from him. Thereafter, we tied him with a rope.
“I was even the person that told a crowd, who attempted to beat him, to call the Police to arrest him. When the Police came, they took him away.
But to my surprise, when I went to the station with the chairman of our section, I was arrested with another relative of ours. As I speak, I don’t know the reason why I am arrested.”