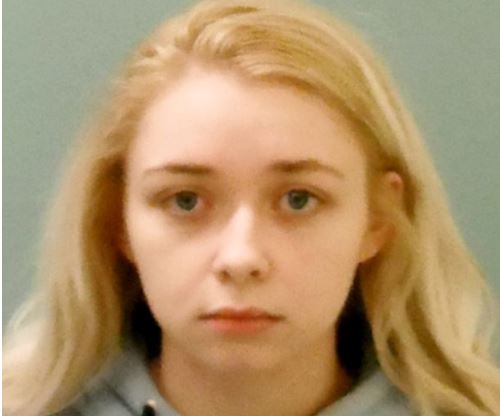 A jealous girlfriend who posed as a fake police officer for more than two years to control her ex-boyfriend and ban him from seeing other women has been jailed.
According to a Police report, Jilted Lauren Adderley, 21, used “sophisticated catfish style behaviour” to manipulate her former partner Mitchell Lloyd, 22, following a short fling in 2014. She made him believe he was subject to curfews, which restricted him from going to certain places and seeing other women.
The court heard that it ‘completely ruined’ his social life. Adderley of Telford, Shropshire, pretended to be various officers to stop Mr. Lloyd from seeing his own friends as well as other girls and threatened him with legal action if he did not comply.
The 21-year-old would also pretend to be her own friends and chastise him for seeing women when he tried to start up new relationships. Shrewsbury Crown Court heard the former administrations assistant who lost her job had entered into a brief sexual relationship with Mr. Lloyd in September 2014. But the young man broke it off two months later after she told him she had previously been the victim of a crime.
She asked whether he would be willing to provide a statement of the offence, at which point she started to take on the persona of the police officer ‘Robert Hay’ Between December 2014 and February 13 this year, Adderley persistently contacted her victim using three email addresses belonging to fictional officers. She also created two fake Facebook accounts pretending to be her own friends, and used them to repeatedly criticise him for engaging in relationships with other girls.
At one stage, when Mr. Lloyd started seeing a colleague from the store he worked at, Adderley grabbed a pair of scissors and told him: ‘That she would kill herself, and it would be his fault’. The next day, a fake officer told him to immediately end the relationship, before Laura herself texted him to say: ‘No one can ever love you like I love you x.’
Her former lover said he was left feeling ‘terrorised’, and became ‘isolated from his friends and depressed’. He eventually went to report the issue to the police in February of this year after confiding in work mates. Prosecuting officer, Dafydd Roberts, told the court ‘On one occasion, Mr. Mitchell wanted to take own mother and his young daughter out for lunch.
‘They attended a public house together. However, he received an email from Robert Hay saying that he was breaking an order by doing so, and was threatened with a sanction.
‘He was told that he could be fined around £3,000 for wasting police time, and that he would be fined around £15,000 if Laura Adderley’s case did not succeed.’
The court was told that after a while Mr. Lloyd received an email from another police officer, ‘Darren Clarke’.The officer claimed they had taken over the case due to Robert Hay’s personal connection to Ms. Adderley, and the same pattern continued. Another fictitious person, ‘Elaine Thomas’ who was supposedly a senior police officer, then took over the case. Genuine officers were immediately able to deduce that the emails were fake, and traced them back to Adderley.
Adderley who was later arrested, admitted to impersonating a police officer and stalking. She was jailed on Friday for nine months at Shrewsbury Crown.
Source: The Sun UK