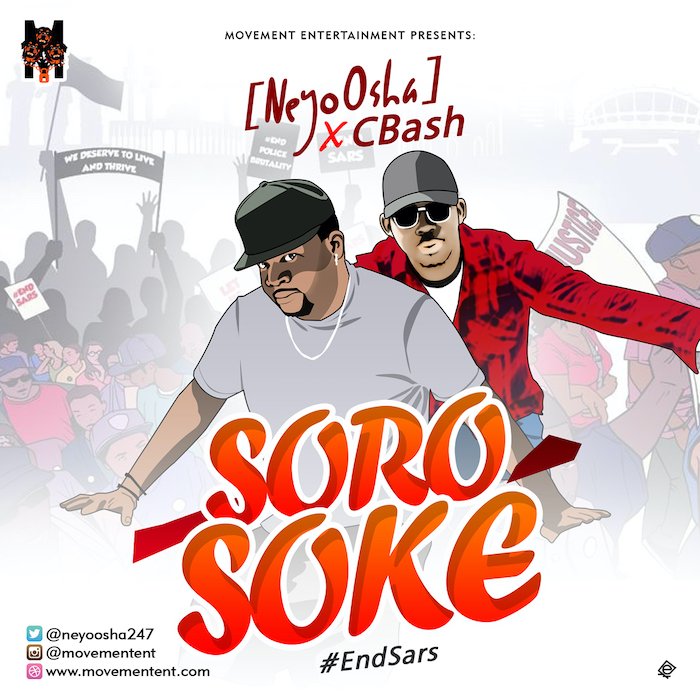 After the success of his previously released single titled “Commando”, Movement Entertainment presents the Nigerian versatile Afro Pop singing sensation, actor, performer and songwriter – NeyoOsha, as he teamed up with CBash to deliver this amazing record titled “Soro Soke”.

NeyoOsha and CBash lend their voice on the ongoing youth peaceful protest in Nigerian and social trends #EndSars #EndPoliceBrutality.

This record is also to redhead the ongoing #endsars protest in Nigeria against the Sars a unit in the Nigeria police force and the police brutality, killing, kidnapping, insecurity, bad governments, lack jobs, lack of stable electric power supply, bad road, corruption, lack of infrastructure amongst many others issues.

In this amazing song, NeyoOsha also speaks up more on the latest issues trending nationwide on social media and also on the street #EndSars #EndPoliceBrutality protests and prays for peace in Nigeria and charges the Nigerian government to do the right things to improve the welfare of the citizens and for themselves alone as politicians.

Soro Soke is produced, mixed and mastered by Tycoon Beat and it promises to rock the airwaves and speakers. Listen, enjoy and share your thoughts below.