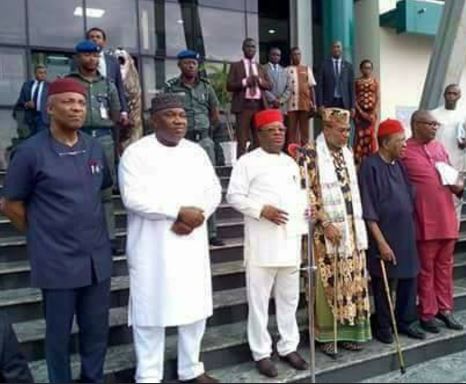 The Nnamdi Kanu led Indigenous People of Biafra (IPOB) rejected the plea of the governors of the Southeast zone of Nigeria during a meeting between the pro-Biafra group and the politicians.
The closed door meeting held at the Enugu Government House where the governors attempted to convince Kanu to drop his agitation for Biafra but failed. According to reports, the meeting also failed to stop his threat against the November 18 governorship election in Anambra state.
The governors had invited Kanu to discuss issues concerning the alleged violation of his bail conditions for which the Federal Government had asked an Abuja High court to issue an order to re-arrest him. They pleaded he talks to his supporters to relapse on IPOB pursuit.
At the meeting, Kanu is quoted to have said,
‘these are the people that sent me. I didn’t send myself. If you leaders genuinely love this land and her people, you will not call these people my supporters but our supporters. They are pursuing the most sacred cause in life. That is freedom! You don’t kill people who are begging for breathe and life. It is sacrilegious but you have done such. Biafrans want freedom which is life’.