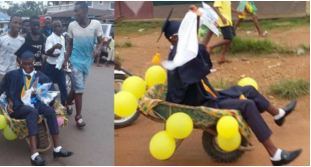 According to facebook user Philip Blamo who shared these photos with a series of captions, this yough boy has just graduated from school by paying his school fees selling pure water;
Liberia: Humbly Dignified Our Hero Of The Year. Poor economic hardship did not stop him from completing his high school education.
He sold cold drinking water on the street of Liberia Margibi County to fund his education . His friends were so proud of him and decided to sponsor his graduation program. He was escorted home by his friends in a Weelbarrow and with a cheering crowd singing and dancing to his achievement. 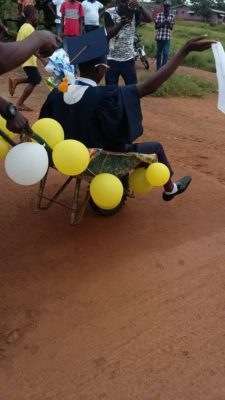 He is my hero and Liberia’s hope ……. Rev. Blamo.
Liberia: Our Graduate Of The Year.
From Selling Cold Water on the street of Margibi Liberia to the completion of his high school diploma our graduate set the stage for a new Liberia.  No big cars to take him home after the graduation ceremony at the school, but his dedicated friends escorted him home in a Weelbarrow and he was welcome home as a hero and hope for Liberians youths. 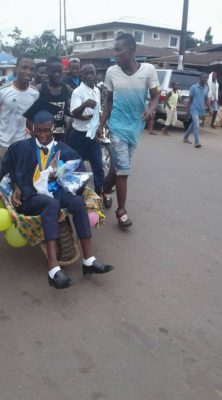 Liberia: Graduate Storm His Home Town With A Triumphant Entrance In A Wheelbarrow. It was not a political campaign neither a rally but a simple and humble graduation ceremony when a young man, the first in his family to graduate from high school was received with a rousing welcome in his town in a Wheelbarrow.
Congratulations. 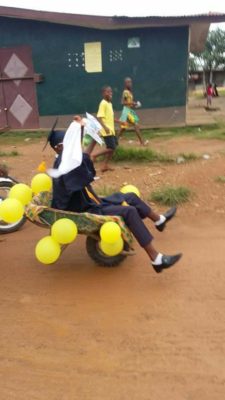