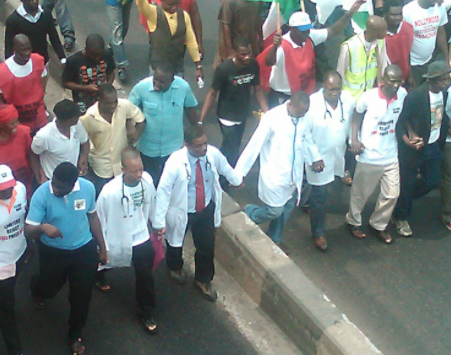 Resident doctors in government-owned hospitals under the aegis, National Association of Resident Doctors, NARD, have announced they are embarking on an indefinite strike beginning from today September 4th. The doctors announced their strike action in a statement released today September 4th.
The members of NARDs are demanding for the resolution of persistent shortfalls and unpaid arrears of salaries earned in both federal and state tertiary health institutions, the enrolment of resident doctors into the Integrated Personnel Payroll Information System (IPPIS) since 2003, and non-implementation of adjusted House Officers’ Entry grade level equivalent since 2014, the resolution of issues around their stagnation of promotion and non-promotion of members who have met requisite criteria despite all collective bargaining agreements and circulars.
The statement signed by NARD President, Dr. Onyebueze John in Abuja announcing the strike action reads
“Rising from our NEC meeting, which started by 7pm yesterday and ended 3am today. NARD has resolved to reject the promissory offer from Government, and proceed on total and indefinite strike action until all items in her demand list for strike action are resolved by Government.”