A facebook user has taken to his timeline to expose a Port-Harcourt base woman of God by name Miss Esther Raph (woman of God as fondly called) head pastor of Solution Group Ministry International Church, located in Choba district area of Port-Harcourt and her friend Ezinne Elizabeth Umeh for allegedly running away with his money and refusal to pay him for service rendered.
In a chat with Starzone, the young man narrates how he got the shock of his life that a lady who claimed to be a woman of God can subject herself to such a dubious and criminal act.
In his word as he narrates;
“I was introduced to this young lady (a woman of God) and her friend by my niece, that was around 30th of May. So I was given a job worth of N15,000 which includes designing and printing of flyers, banners and posters of Solution Group International Empowerment Programme, a programme hosted by this woman of God and her friend, which took place on the 3rd of June.
I worked day and night making sure I delivered the job on the agreed date and time even without any deposit made because of the level of trust and confidence I had in her reputation as a woman of God (as claimed).
I was sent all the details of the job via whatsapp by the woman of God. After I finished the job she requested to see a sample of the work which I actually sent via whatsapp. After sending them the sample of the work done as requested, they recommended the work very well and I was asked to send my account details for fund transfer which I immediately did.
After two days I was still waiting for an alert, but meanwhile the advert publicity of my job is already taking place, she even used it as her DP even when I have not been paid. I waited for more two weeks but to no avail and all efforts in reaching the woman of God as claimed proves abortive, as she even went ahead to blocked me on whatsapp as to cut-short of our communication. I later wrote to her friend Elizabeth since the woman of God has blocked me requesting for just N2,000 to pay for the design of the job but she only replied me “ok” and never said or did a thing till date.
It’s been like 3 months now and ever since then I’ve not heard a thing from either of them but I promised them that the world will hear my story.
My advice to the general public and to anyone dealing or associating with them is to be careful as not all that glitters are gold. It’s still a shock to me because I know they can afford the money but whatever be their reason remains a mystery”
Below are the whatsapp screen short conversations that took place. 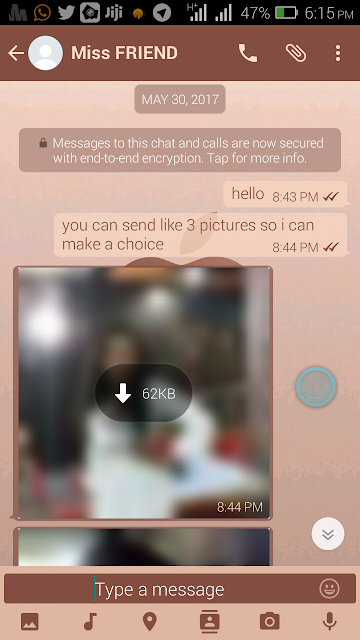 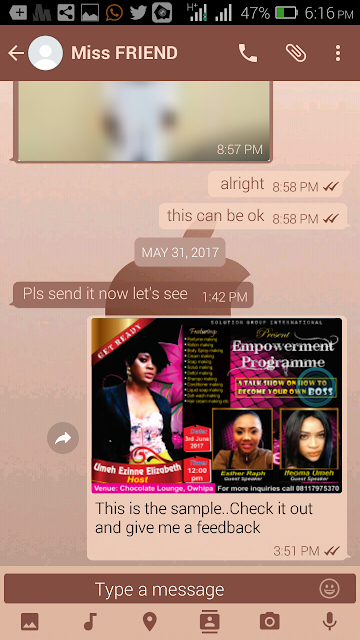 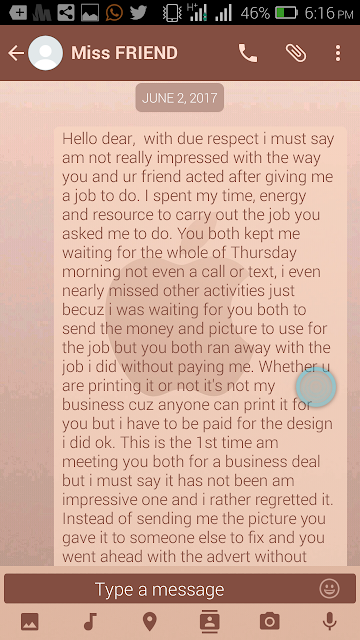 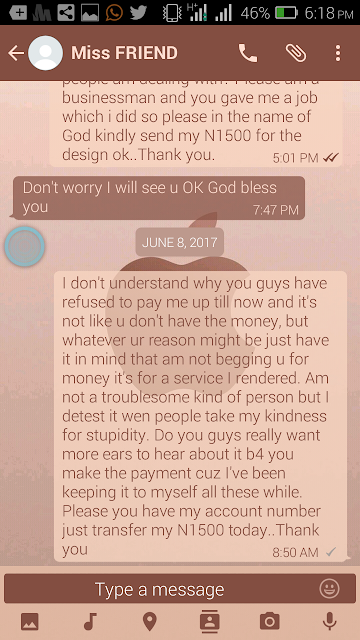 Conversation between Mr. Gift and Elizabeth (a friend to the Woman of God) 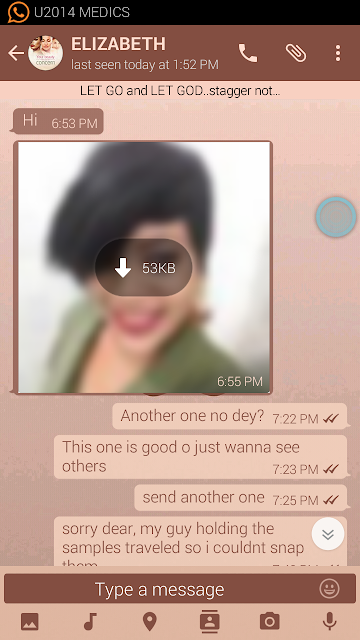 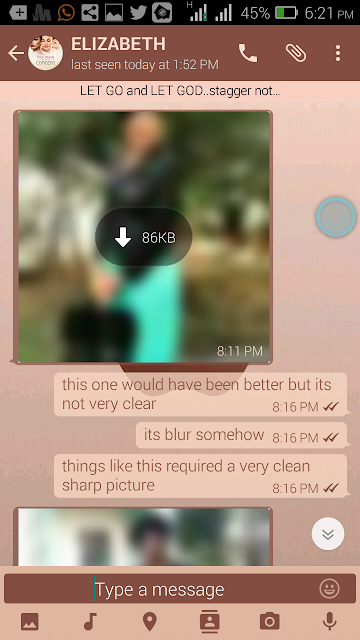 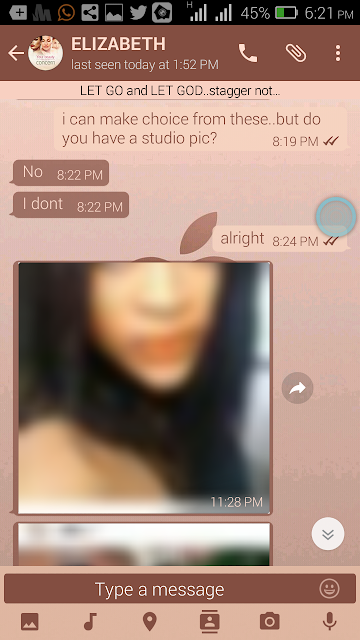 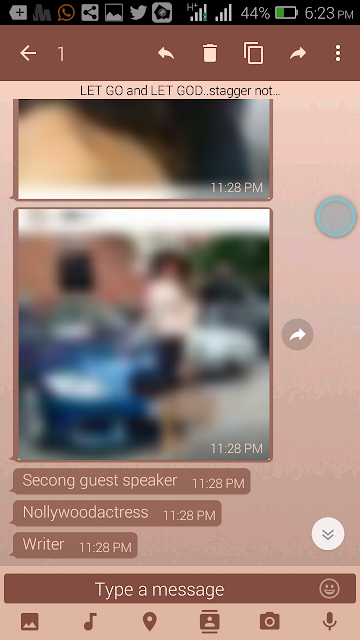 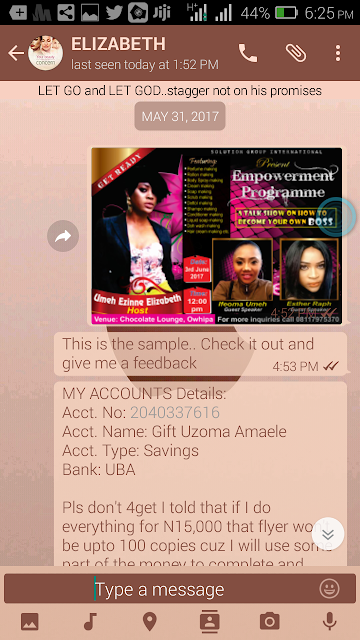 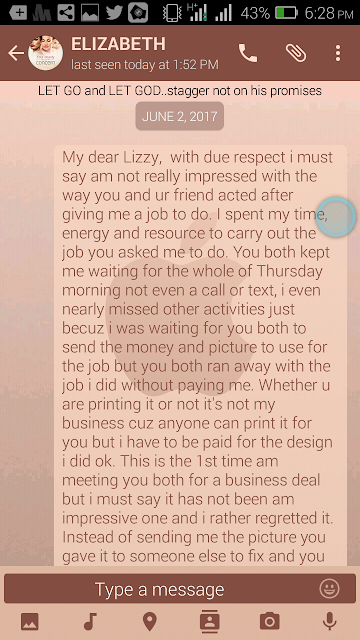 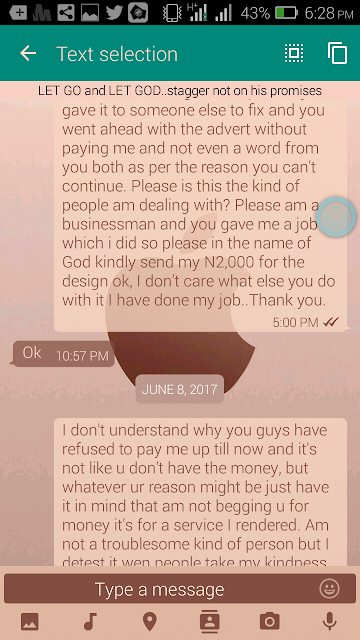 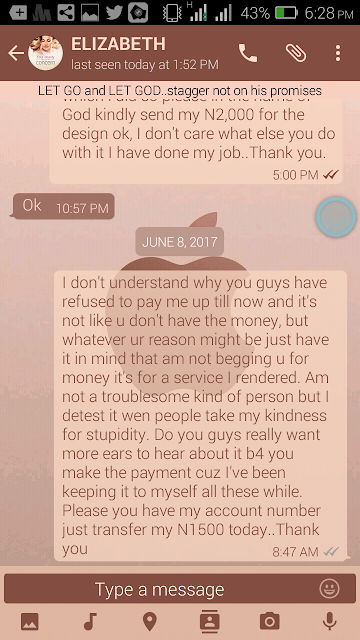