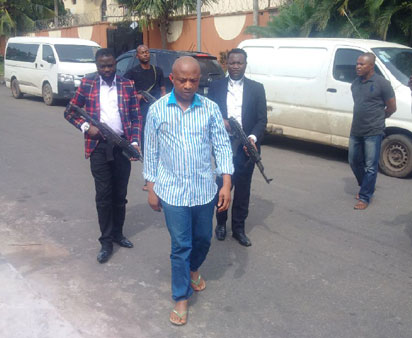 Suspected kidnapper, Chukwudumeme Onwuamadike, otherwise known as Evans has pleaded guilty to two counts bordering on kidnapping.This follows his arraignment today before Justice Hakeem Oshodi at the High Court in Lagos by the state government.The suspect was arraigned alongside five others; Uche Amadi, Ogechi Izechuwku, Okechukwu Nwachukwu, Chilaka Ifeanyi and Victor Chukwunonso.Their arraignment at the court was witnessed by a large crowd of interested parties while there was a heavy presence of security personnel.While Evans, Amadi and Nwachukwu pleaded guilty to both counts, Izuchukwu, Ifeanyi, and Chukwunonso pleaded not guilty.Following the plea of all six defendants, the Attorney General of Lagos State, Adeniji Kazeem, who led the prosecution, asked for a trial date and for all defendants to be remanded in prison custody.The counsel to Evans, Olukoya Ogungbeje, had no objections to the Attorney General’s request for adjournment. but he told the court that he has had no access to his client in detention.Ogungbeje, however, told the court that he has had no access to his client while in detention.Justice Oshodi, thereafter, ordered the remand of all the defendants at the Kirikiri maximum prison, Apapa and adjourned further proceedings till October 19, 2017.