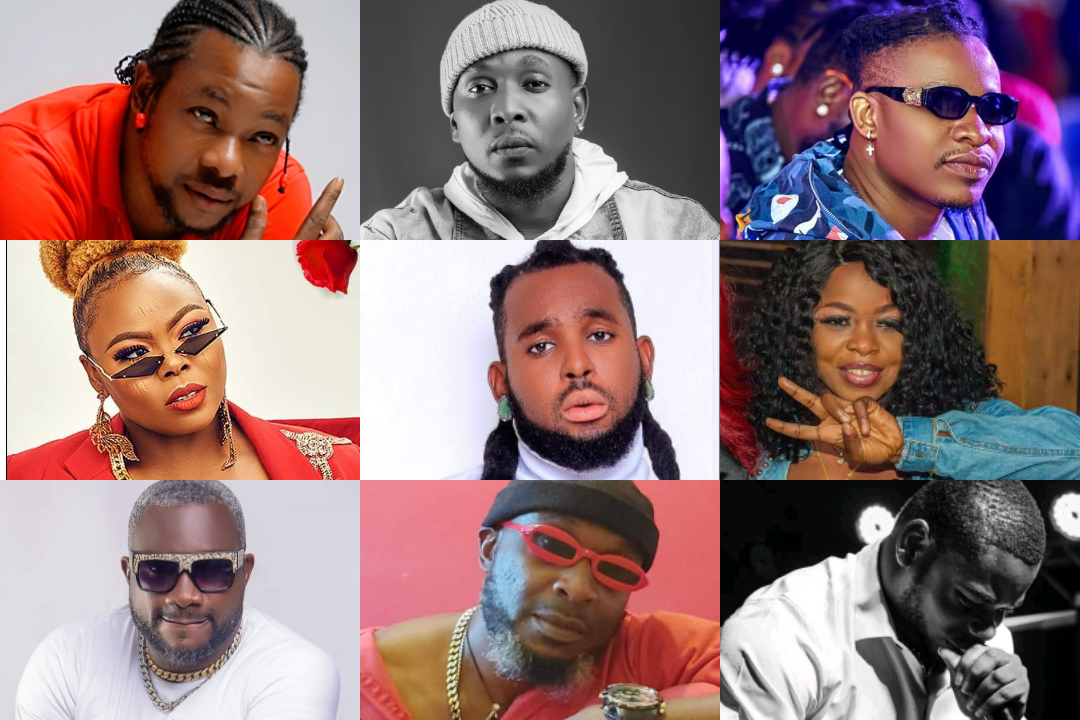 Recently, the city of Port Harcourt have been feeling the waves of several Artists who had made sure the music industry remains an enjoyable platform for everyone, and this we can’t undermine at any cost.

Allow me to present to you a few of those musical talents keeping the Port Harcourt music industry busy with their recent projects.

Note: This list is created and only includes the home base Artists, the listing is in no particular order but random base.

— The Segz Records frontline Act has recently dominated the Alaba music market with his latest debut “KONJI” featured in over hundreds of mixtapes. His recent visual “GAWU” is not only gaining massive views on YouTube but also making waves on several TV stations within and outside the shores of Nigeria.

— Fondly called the ‘Choko king’, this music sensation has not only successfully made himself undisputable in the PH music industry but also his recent single “ORORO” becoming a household name in PH. Meanwhile the visual of the song will be dropping prior to his forthcoming ‘Maxi Live In PH Concert‘ in December.

— Popularly known as the Oshikiri boss lady, this music diva has been so consistent in the music industry which has paved ways for her involvement in various show performances. The songstress has been feeding her fans on a steady content. She recently released a classical visual of a latest single titled “Love Killi Me Die”, and will be hosting her ‘Oshikiri Festival‘ comes this December.

— Returning to the music scene after a short break, this rising star took the music industry by storm by releasing a lead single titled “No Vex” off his forthcoming EP tagged “Sound Of Nelly” (SON). The visual of the song which was shot by one of the most sort after video directors State Filmz is assured to be promising and ready to break the internet once it drops soon.

— This energetic melody songstress is currently making several headlines with her performances in shows, and has been lighting up several events since the beginning of this year. Her latest debut Single “OGOGORO” is currently dominating the media space with steady airplays across several radio stations in PH.

— Also known as the HK Boss, this Afrobeat vibe lord took the music industry by suprise after he return to the music scene following a long break to brand himself. Currently, the singer is tormenting the music space with his recent debut project titled “Chill Out” which was backed up with a classic visual that has continued to gain massive audience.

— The Educated Street Boy (ESB) frontline act is a controversial rapper that eats beef (diss) for a living, if you know what I mean. Famous for his dissing hobby and always ready for a head fist, this rapper has continued to entertain his fans relentlessly. His recent debut “No 48” ft. Dr. Barz gave the city of Port Harcourt something to talk about till date, and his upcoming EP titled “PROBLEM CHILD” will be doing even more harm to his foes.

— Fondly called Chief CNine, this veteran Afrobeat and indigenous singer has been serving fans all hits since the onset of this year 2022. His debut track “Make A Woman” was a lead single to his recently released 11 tracks Album titled “Journey Man” which has set him on a smooth pace ever since.

— Bukwild is no doubt a wave maker that represents the indigenous Afrobeat genre. His kind of music brings back so much memories and could be related by audience of all ages. Earlier this year the “Show Me How To Fish” crooner showered fans with a hit single titled “Need More” which Impressively gained massive streams on Spotify. Recently he dropped another new popular demand debut titled “Ama” backed up with a satisfying visual that will keep you entertained.

— This Nigerian rapper and the Empire Dreamin Records (EDR) boss is one of the most talked about musical Artists in Port Harcourt. The rapper has been more relevant and very consistent this year with his back2back song release. Rapper Kashmoney TheForce is also known for his selfless humanitarian services. His latest released Album titled “JUDAS” got a buzz after it was reviewed by American superstar rapper Fatjoe.

— This fast growing Afrobeat sensation is flying higher than ever with his latest debut “Me And My Guys“. The No Limit frontline act also got featured in a recent song with rising star ‘Big Dada‘ titled “WMBMB” (What Must Be Must Be), his flawless delivery made the song an irresistible hit project. His exceptional craft recently got him a performing slot at the forthcoming “Sabinus Live In London” concert happening this September.

— This singer is well known for his impressive choice of words when it comes to music. He’s one of the most cherished and loved musical Artists in Port Harcourt. Over the years this hot talent has never failed in giving his fans something to vibe with. His recently released single titled “MY WOMAN” has been an addiction to many music lovers.

— This Nigerian fast growing act has a gift of uniqueness in music which indeed has really set him apart from his colleagues and gave him the nickname “King of RnB” in his region. With his recent release titled “Show Us The Way“, the RnB singer has been on the lips of many music lovers as he continues to gain massive audience around the world.

— This young talent has been very much impressive since this year. Few weeks after hosting his first career music concert tagged ‘Anytime Soon Concert‘, the Afrobeat independent artist is now out with a new visual titled “BILLINGS“, retaining the list of most consistent act in PH.

— Oribanks is another independent Artist who has been very impressive with his consistency in the music industry. Following the release of his 6 tracks EP titled “Youth Anthem” (YA) which was released earlier this year, the singer has also dropped a visual titled “Amarachukwu” including other projects that has really kept his fans busy.

— The North Hill Music Entertainment record label frontline act is one of the most successful gospel music singers in Port Harcourt doing extremely well in the music industry. With several songs already released she’s no way near from taking a music break. The visual of her latest song “Sovereign God” is currently been aired on several TV channels with massive YouTube streams.

— This celebrity producer and Recording Artist is fasting becoming a media sensation with his consistency in the music industry. After releasing several singles he also went ahead to drop his “UNCAGED” Album that crowned it all.

— Popularly know as the ‘Bole King’, this multi-talented VDJ and recording Artist is a hitmaker that has been consistent in the PH music industry. After releasing the trending hit song “KILL US” the Afrobeat fusion act has also rolled out a brand new joint titled “NO SHI SHI” which features popular rapper Abobi Eddieroll.

— Rap music has never been this fun until this popular freestyle god brought his exceptional skill into it and made rap a genre that can be enjoyable by both the old and young. This Port Harcourt born act has been able to successfully distinguished himself from other rappers which made him an internet sensation across Nigeria and Africa, and this has also earned him recent endorsements.

— Following the successful release of the still trending 6 tracks EP “BABANGIDA” which is made of my favorite collections of his best works so far, this Port Harcourt music born breed popularly known as the Internationalboi King Jfly also served us with yet another Energy Party experience this year. The Balanciaga king has always remain the favourite of many music lovers.

The Yayotoh Nation frontline act who goes by his stage name Sarro, is undoubtedly one of the most consistent act in Port Harcourt music industry, loved and cherish by a large fan base. Having dropped several amazing hit records to his credit, his latest single titled “Man Like Sarro” is one song that has been making trend across the media space and several airways.