A Twitter user in Japan has been banned from using the social networking site after he made a death threat against a mosquito.
Tweeting abuse would sometimes get you banned from the platform but Twitter’s decision to ban user @nemuismywife has attracted ridicule on social media.
It started on 20 August when he was repeatedly bitten by a mosquito as he was watching TV.
After killing the mosquito, he tweeted:
“Where do you get off biting me all over while I’m just trying to relax and watch TV? Die! (Actually you’re already dead).”
He added a picture of a dead insect to his tweet. Some time later he received a message from Twitter saying his account had been frozen and cannot be reactivated. He set up a new Twitter account, @DaydreamMatcha, to criticize Twitter’s decision. 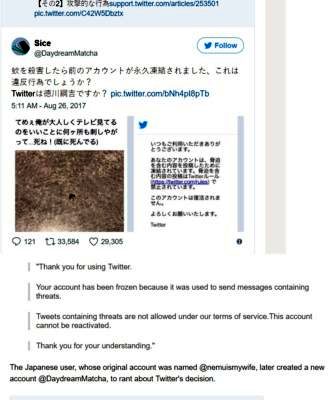 “My previous account was permanently frozen after I said I killed a mosquito. Is this a violation?”
His angry tweet was re-tweeted more than 31,000 times and liked more than 27,000 Twitter users:
Twitter has rolled out a number of new measures and tools to curb online abuse and harassment on its platform. Some reports claimed the tweet was flagged by an automated programme and not by a human moderator.
US business magazine Fortune reported that Twitter launched an algorithm to detect abusive behaviour by looking and picking up key offensive words.
Source – BBC.co.uk