A sad incident just happened at the University of Maiduguri in Borno State, after a female student who just gave birth to a baby girl, killed the baby and was trying to force the baby through the toilet when she was caught.
The incident which took place at Murtala Female Hostel on the 24th of May, was shared by a Facebook user by name Enyigwe Supreme Peter, who wrote:
“Some ladies are heartless..crazy, stupid. In fact I don’t know any word suitable to describe this lady. Sometimes I wonder why some girls don’t have the fear of God in their life..
The picture below is a true life story of what just happened at Murtala female Hostel at the University of Maiduguri today.
As a lady gave birth to a female child..killed the child by herself and was coercing the child into the female hostel toilet..My question is. If this lady was treated in this manner will she be alive today?? Who will marry such a heartless woman as a wife?”.
Apparently, some public opinions suggested that the lady should not be quickly judged for condemnation until the mystery surrounding her evil act is uncovered. Some also believed that the lady in question might have gone through a rough psychological experience as no normal lady will want to carry out such evil act on her normal senses. 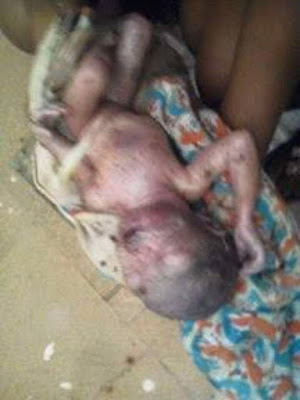 The question is..What is your opinion on this? Drop your comments.